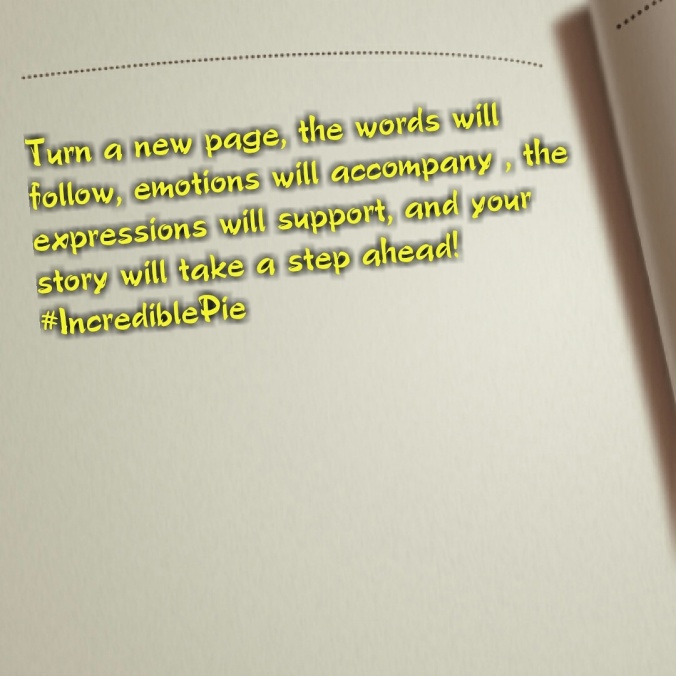 Turn a new page, the words will follow, emotions will accompany , the expressions will support, and your story will take a step ahead!

Hello Guys! So, I am here to confess something…

For the last few weeks I had been engaged in various life activities that are said to represent the real world(Ya! To an extent it is…as bitter it may sound but it is…)

And hence I could not put in my mind into the WordPress world of reading, reviewing and supporting my fellow bloggers for their amazing creations.

Guys! I know Sorry is not a good word to say so I would rather say I Love You All and admire each and every word that you imagine, carve and present in the form of blogposts. (Hope you accept this as apology. I really had no words but to say this.)

Will be back soon, guys ,in my original form…We will review…we will appreciate… we will talk…(A lot this time…😉) .. We will give enough exposure to the fellow new bloggers….We learn a lot from the experienced players…and we shall enjoy this blogging journey….☺☺☺

Thanks a lot for reading this crazy confession.. but then I had to do it anyways because it had been haunting my mind for a long time…

Hope You will Pardon me..🙏

Keep reading , Like No one is listening… except you!!

I won’t like to make you go emotion stained( is it? For me it is though!!😉😂), but just two words would be enough to convey my feelings to you.

Thanks for making me learn everyday and being there to kick off my ass whenever you feel like!!😉

Thanks for being an inseparable part of the IncrediblePie family, In case you wish to add me to your lives:

Google Plus
Lots of Love!! Stay tuned and Keep Rocking the world with your writings and ideas!!☺👍

If you are truely in love, you won’t be able to recognise what exactly was your first move,

It was almost silent indoors, most of the people were busy with their smartphones and laptops. Some not so busy, stuffed earphones and slept in solace. Some hungry, chubby kids randomly peeped through the passage, whether refreshments were being served, and probably their wishes were granted.
Two lean men,one with stacked trays of Refreshment and the other with a carton of RailNeer Water bottles marked their entry into the compartment, with a screeching sound of the sliding door. They began serving.

The coach was not much occupied and there were many vacant seats. One of the kids was constantly changing his position between two vacant seats.

Children enjoy a lot in the trains!

Kushagra was constantly looking outside the window and pondering over something that had it on his nerves since long.

“Excuse me Sir! Here’s your refreshment! Ma’am here’s your”, interrupted the attendant.

” ya! Sure. Thank you!”, replied Pratishtha.

Disconnected from all these stuff, Kushagra kept pondering on the outside world that moved past his eyes.Industrial setups on the outskirts of Delhi, Roads, traffic jam, Cart pullers drained with sweat, Delhi Metro making strides, Local trains and people hanging on the doors. He could see much, but all he was able to comprehend was that none was perfectly happy in his/her world, still they were upto their daily routine and the rules setup by the society.

“Hn.anh..”,He jolted, as if he suddenly woke up from a dream!

“Have some refreshments!”, she said offering him the sandwich.

” oh! Have some please. You did not have your dinner last night! Did you?”, she pleaded.

‘Zummm..Tagad… Tagad …Tagad tagad..’,Suddenly a train passed on the adjacent track in opposite direction. The previous night cascaded infront of his eyes.

As he unlocked the door, he could find a pamphlet lying on the doormat.

Are You Really Happy with your Life?

Is your life stressed to its maximum limit?

Have you lived your life upto its fullest?

Have you made a to-do list, but not able to achieve it?

Guaranteed Solutions!! Meet the experts! Change yourself within a week!

Call on the following numbers:

He sat down on the chair. Kept his bag aside, threw his shoes in disgust, first the right one followed by the left one.

“How  could you be so careless! You’re a senior executive!Damn It!

Isn’t the company is paying you fucking enough to get your ass off the shit!!!

You’re a bloody looser!! Get the fucking out of my sight”

He swiped the Notification bar.

‘Time for Clash of the Rules!!’, adressed the caption of the selfie. It was Pratishtha.

“Scee…chtch”, the train stopped with a jolt.

There was commotion in the compartment. A bulky lady entered the coach with an even big Luggage. She struggled hard to fit into the seat adjacent to the third row.

“Have a look! This is the journey map.I have created it myself.”, Pratishtha said handing over the iPad to Kushagra.

“That’s huge”, Said Kushagra, bringing a smile on his face.” And you, were going to do that alone?”

“You haven’t changed a bit Pari”, he said hitting her head softly.

The train started with a jerk!!

Hello guys!! How did you like the second episode of Rules Priority Clash😇 series? Do let me know in the comments section!!

Stay tuned for yet another exciting episode of this series!!

( Okay! You must be thinking “Should I be surprised about that?😎Lol! Instagram is so common, right!!” ).

Whatever be the judgements you make but Here’s IncrediblePie is on Instagram.!! Trolled😊😊